A family-owned business located in Quebec city since 1940

On March 1940, with only $100 in his pockets and the help of providence, Marcel Latulippe (shown right) establishes "LA ROBE DE QUEBEC", which specializes in the sale of second-hand dresses and was the precursor to what is known today as MAGASIN LATULIPPE INC.

Right from the beginning, LA ROBE DE QUEBEC is very successful. Its customers are women who buy these dresses to wear them, to take them apart or even to use parts to make new clothes for women and children. These dresses were sold for $0.59 at a time when people earned $0.35 an hour. Running the business requires an extraordinary amount of work: dresses have to be mended, cleaned, and ironed before being put in the store or wrapped for mail order. It would be incumbent upon Mrs. Lucienne Latulippe, the owner’s wife, to carry these numerous tasks relentlessly, on top of raising a family...

In 1941, brand new merchandises are rationed and become more and more expensive. Selling second-hand merchandises thus seems like a profitable source of revenue, while allowing to answer the needs of a wide range of people. Therefore, new types of clothing are added to the shelves of the store, which moves to a new location and is renamed MAGASIN D'OCCASIONS GENERALES. New merchandise includes coats, skirts, costumes, pants, suits, overshoes, shoes and work shoes.

At that time, on top of a wide variety of articles, the store successfully sells surplus from the Second World War. In 1945, the Latulippe family launches once again in a new venture by buying « au char » (French colloquialism meaning "by the train car"). The blooming store renames itself LATULIPPE SURPLUS DE GUERRE, moves on Rue St-Vallier and starts selling thousands of uniforms, reconditioned boots, blankets, overalls, prisoners shirts, soldier’s raincoats, rifles, tents, sleeping bags, mattresses, beds and even coffins.

Having become experts in work clothes, the store managers, well aware of new market trends, become more and more interested in selling material for hunting, fishing, camping and outdoor activities. Furthermore, from the 1970s onward, second-hand articles are progressively eliminated from the store and are replaced by clothes that are new, attractive and above all, more comfortable. In 1979, the company MAGASIN LATULIPPE INC is created. After having sold clothing, shoes and equipment to three generations of workers and sports and outdoors fans, Latulippe, whose sales reached a mere $50 000 in 1940, now sells a few tens of millions of dollars in merchandise and employs over 150 people. 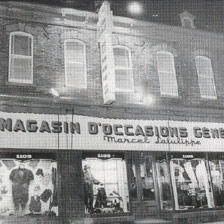 In the mid-1990s, 2 divisions are added to Latulippe’s retail store. The industrial division (Magasin Latulippe, Division Industrielle) which sells clothes and security equipment directly to businesses, and Dupont, which specializes in wholesale and distribution of hunting and fishing products to the whole eastern section of the province of Quebec.

In 2000, Latulippe’s third generation starts taking the leadership and continues the expansion of the business. In 2009, the store on St-Vallier street is renovated and expanded, and in 2015, a new store is opened on Quebec city’s southern shore, growing the staff to 230 people. New products appear regularly to keep giving up-to-date services and to attract new customers who evolve with the transformation of outdoor activities. Lastly, thanks to online shopping, Latulippe can now serve even more customers everywhere in Canada.

These 75 years of constant evolution allow us to say that we have been growing with you since 1940, and still do. In the name of its past and current employees, Latulippe thanks you for your indispensable and much appreciated loyalty.

Sign up for the Latulippe newsletter and stay up to date with our new arrivals and promotions.